Following the Council of Trent, Pope Pius IV (Giovanni Angelo Medici) ordered the creation of the Neptune Fountain, a Renaissance work that was part of the broader program of architectural renewal of Bologna’s city center (more specifically, the Piazza Maggiore), which was realized under the auspices the papal vice-Legate Pier Donato Cesi.

This vast urban redesign included Vignola’s façade of the Palazzo dei Banchi, as well as the new seat of the Archiginnasio (1563) and the square in front of it, the Piazza delle Scuole (now Piazza Galvani). At the same time, a complex water-channeling project was initiated, taking advantage of a new aqueduct that was to bring water from the springs in the hills near San Michele in Bosco down to a series of public fountains near the Palazzo Apostolico (Palazzo Comunale).

Symbol of the governance of the papacy

Born of a collaboration between an architect, Tommaso Laureti, and a sculptor, Giambologna (Jean de Boulogne), the fountain was imagined from the start as a spectacular symbol of the generosity and good governance of the papacy, so much so that it was originally named AQUA PIA in honor of Pope Pius IV.

The fountain was designed with an eye to symmetry and it presents a dramatic vertical surge, with different groups of figures (dolphins, mermaids, coats of arms and putti) surrounding the figura serpentinata of Neptune, the crowning feature of this monumental structure.

The great basin, made of Verona marble, bears an inscription on each of its four sides:

These illustrate how the fountain was financed, its scope, and the role of the benefactors, whose names are also listed in Latin:
PIUS IIII PONT. MAX (Pius IV Pontefix Maximus);
PETRUS DONATUS CAESIUS GUBERNATOR (Pier Donato Cesi, Governor);
CAROLUS BORROMAEUS CARDINALIS (Cardinal Carlo Borromeo);
S.P.Q.B. (the Senate and the People of Bologna). 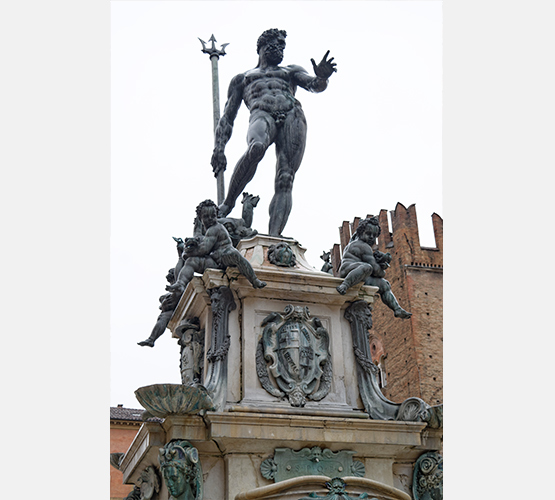 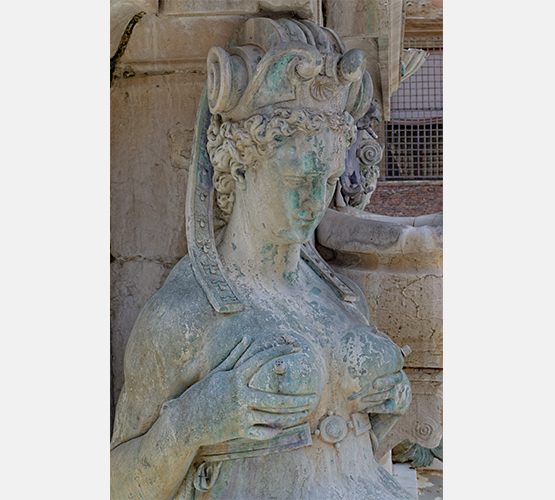 The water was meant to flow abundantly from the 38 nozzles placed in as many bronze figures, thus bringing the fountain “to life” and enhancing its splendor through its technological innovations.

Pier Donato Cesi tried to keep the fountain off limits to the public, and the idea of surrounding it with an iron fence (which was removed in 1888) accentuated its role as a monument that was to be experienced purely visually and symbolically.

In fact, the only access to the precious spring water was a public wall fountain in nearby Piazza del mercato de’Pollaroli. Known today as the Fontana Vecchia, this second fountain, also designed by Laureti and recently restored, can be found on the northern wall of Palazzo Comunale, along today’s Via Ugo Bassi.